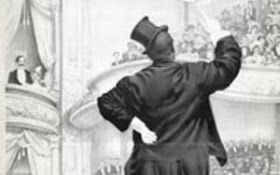 White folks attention, and listen to my song
I'll sing to you a ditty and it won't detain you long
It's all about a pretty girl, whose name was Sara Ann
And she fell deep in love with the ham fat man

The ham fat man, he fell deep in love
All with Sara Ann, to be his turtle dove
She dwelt in Sydney market, no.13 was her stand,
And she sold polony sausage to the ham fat man.

Now the ham fat man, he couldn't stand the press
For every day she wanted to buy a new dress
His money it was gone and the faithless Sara Ann
She hooked it off to Bathurst with a Chinaman

Oh, all you young men, take warning by my ditty
Never trust a girl that lives in Sydney city
For they're bound to play you falsely, and cheat you if they can
Or serve you as they served out the ham fat man.

An example of the late nineteenth century blackface minstrel song popular in Australia at the time.

Coincidentally (?) an American version of this song was published in the United States by Wehman Publishing in one of their songbooks between 1884 and 1899: De Ham Fat Man